This year, on the occasion of Shivaratri, the great night of Shiva, the Pashupati Area Development Trust (PADT) is expecting a crowd of 1.3 million people from all over the world. Devotees from all over Nepal and India are expected on the banks of the Bagmati River to honor Pashupati, one of the embodiments of Shiva. Among them, some five thousand naga babas, naked ascetics, bearded men and inveterate marijuana smokers come together to celebrate Shiva, the creator, destroyer and patron saint of all ganja lovers. According to one of the many legends surrounding Shivaratri, the gods having inadvertently unearthed a poison that could destroy the world, Shiva the goal but he had to stay awake a whole night to dissolve the effects. His disciples kept him company all night long, dancing around a big fire. Since then, the Shiva devotees commemorate this act of bravery by smoking Hashish all night around large fires on the hill overlooking the temple of Pashupati in the suburbs of Kathmandu. 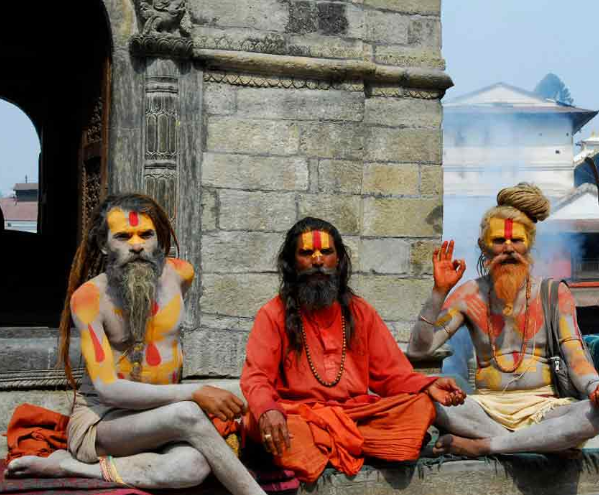 At the entrance of the temple, the old guard, wrapped in his military tunic, watches over the shoes and sorts the elect under a sign proclaiming 'for Hindus only'. But here begins the difficulty: what are the criteria that determine this Hinduity that would give access to the sacred enclosure? Is it the caste, the color of the skin, the religion? By definition one can not be converted to Hinduism, one is born Hindu. But in Pashupatinath it is the facies that makes law: you can be a Muslim descendant of the Mughals who invaded India between the 9th and 13th centuries and who destroyed Hinduism and Buddhism in the Ganges Valley, if you are Nepali, the guard will let you through without any problem. You can also be one of those few thousand Christian Nepalese converted for a few cents by shameless missionaries. Or, to belong to one of the mountain tribes - Tamang, Gurung or Sherpa - considered out of place in the Hindu system, the guard will not raise an eyebrow. On the other hand, some time ago, a group of wealthy Indonesian Hindu pilgrims and their priest were simply refused entry to the temple and this odd failed to create a diplomatic incident. So in Pashupatinath, Hinduism is a nationality, even though most babas come from neighboring country India.

For the successful celebration of the festival, the Pashupatinath management unit began to clean up the area. In addition, this year, more emphasis was placed on finding an easier way to manage the crowd so that the faithful could realize their Puja and Darshan faster and easier.

But this year as well, Shiva's feast may lose some of its splendor. Indeed, since 2018, the Nepalese authorities have decided to ban ganja in Pashupatinath and the Pashupati Area Development Trust says it is ready, with the help of the police, to declare Shiva hill "marijuana-free zone", without any consideration for Shiva and his cohort of devotees: will they have to leave the ganja and go to goat's milk to stay awake all night?

It's a bit like replacing the new Beaujolais with light Coke or the champagne of all festive celebrations with a common lemonade ...

<< Woman and guide in Nepal CORONAVIRUS: last news and our position >>