INTERVIEW WITH JEROME, FOUNDER OF THE BASE CAMP TREK AGENCY

INTERVIEW WITH JEROME, FOUNDER OF THE BASE CAMP TREK AGENCY

- What is the specificity of base camp?
Base camp is an agency that we founded with my Nepalese partner Rashmi Tamot in the early 2000s. Our specificity was the training of French-speaking guides capable of supervising small groups from Kathmandu on all trails in the Himalayas. They have just completed this year a new refresher course on acute mountain sickness and first aid, supervised by alpine mountain rescuers.

As a Tibetologist myself, Base Camp Trek has mainly developed on Tibetan culture destinations, namely: Ladakh, Zanskar, Mustang, Dolpo, Tibet and Bhutan.

To meet a growing demand for individuals looking for travel companions, we have set up in recent years French group fix departures accompanied by local guides and we are probably the only agency to offer this possibility in the Himalayas.

- Do you only offer trekking? 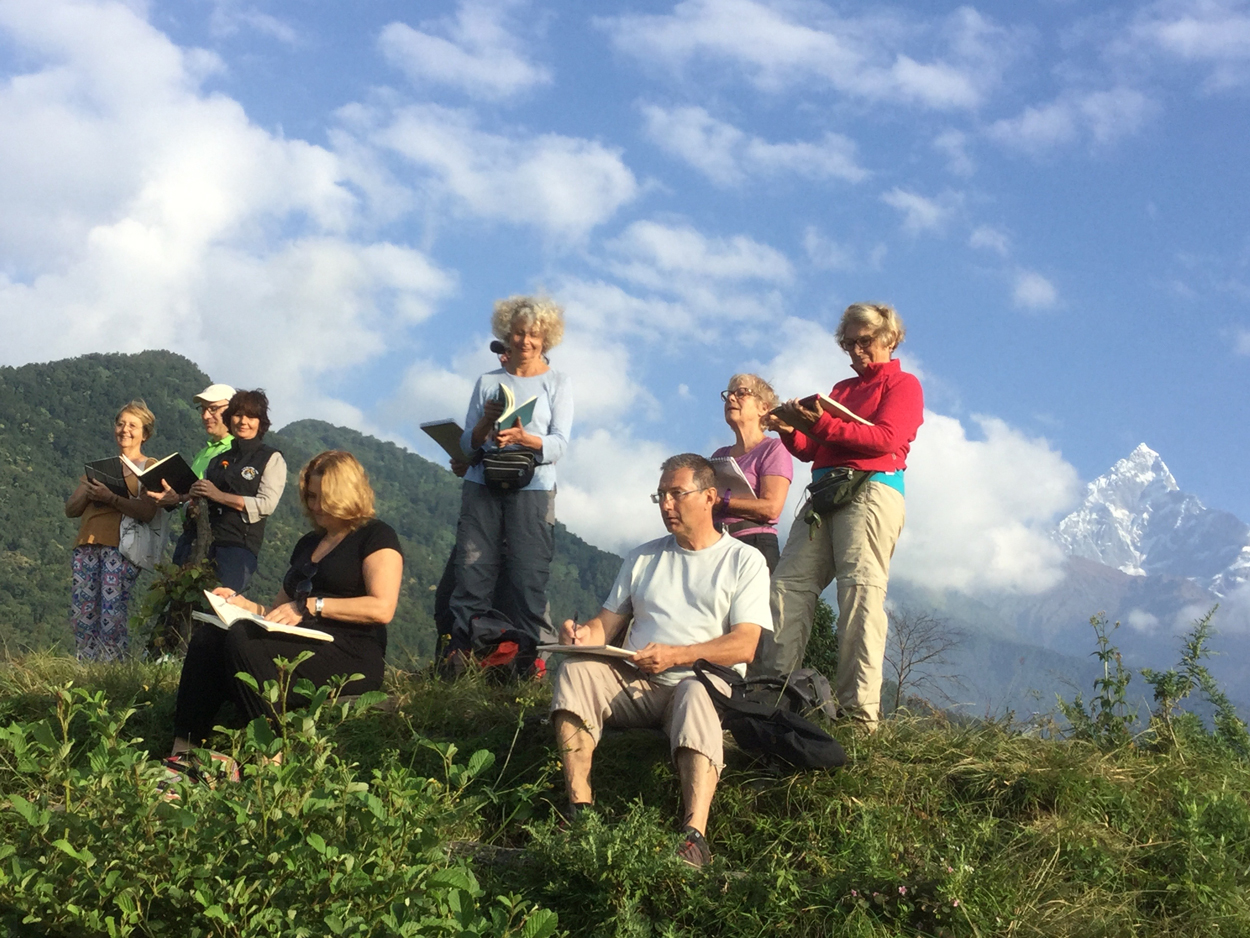 of course We are a leading agency in the organization of trekking and expeditions, but as its name does not indicate it, Base Camp Trek is also specialized in the trips of cultural discoveries.
A walking day rarely ends after 3 p.m., based on this observation, we had the idea of ??using this free time to organize meetings, conferences or even set up activities such as meditation, taïchi or yoga.

Personally I remember the times when, squatting the small temple of the village, from observers we became observed. Indeed, it was the village children who crowded into the windows came to observe these funny tourists, and not the other way around! Thus, we have created trekking and meditation trips in Sherpa country, in the small temples of Ladakh or the Bhutanese monasteries.

- What other activities and theme trips do you offer?
Having practiced ink painting (sumi-e) of Chinese and Japanese origin for more than ten years, and graduated to teach it, I organize and accompany painting, trekking and meditation trips. These trips - like trips focused on yoga- take place on slower rhythms than conventional treks in order to be able to take the time to practice an activity in good conditions.
This slowness is often the best way to encourage meetings, exchanges, and better soak up places and people. (According to the old concept of still travel).

Thus, I organize once or twice a year, trips where I teach the painting methods Tchan I leave precisely in the spring in Burma, in Everest in October, after going to the Annapurnas, to Manaslu ...
These theme trips are often organized around a specialized personality. For example, we collaborate with Marie Milla, sound therapist and yoga teacher who organizes treks open to everyone every year for an initiation to walking in conscience, to sound baths…
We have not yet experienced trekking and choir singing or trekking and the discovery of ancestral practices such as shamanism, I did not say anything but it could be that next fall we will organize a trip to the country Shaman to attend a shamanic congress!
Finally, with the Plastic Free Himalaya association, we are also thinking about Clean Walk projects in the Himalayas, indeed Base Camp Trek has always been committed to protecting the environment; in addition to raising awareness locally, we would like to take action to send a strong message about the ecological disaster with plastic in the mountains represents.

Temple of Kakani, Sherpa region of Helambu: in the beautiful light of one morning, the old monk greets us surrounded by a swarm of snotty and hilarious kids who hope to glean a pen or a cookie in the process. After lighting the butter lamps and a few sticks of incense to wake up the old Padma Shambhava who is sleeping in the darkness, the monk closes the heavy door, rewarding us with a knowing smile and leaves us to our morning meditation. The kids rush to the windows and, their noses glued to the glass, giggle with pleasure while observing these funny meditators who have come to squat in the village temple. But soon they get tired and go back to their games without worrying about us anymore: we entered the landscape, we crossed the mirror.
Our team of Sherpas has folded up the tents and we resume our walk on the path that winds between the fields of barley while the snow-capped peaks emerge one by one from the shade, far over there to the North…

The real places are discovered by footsteps, at the bend of the path. They appear, give themselves to be seen, but not from the start, 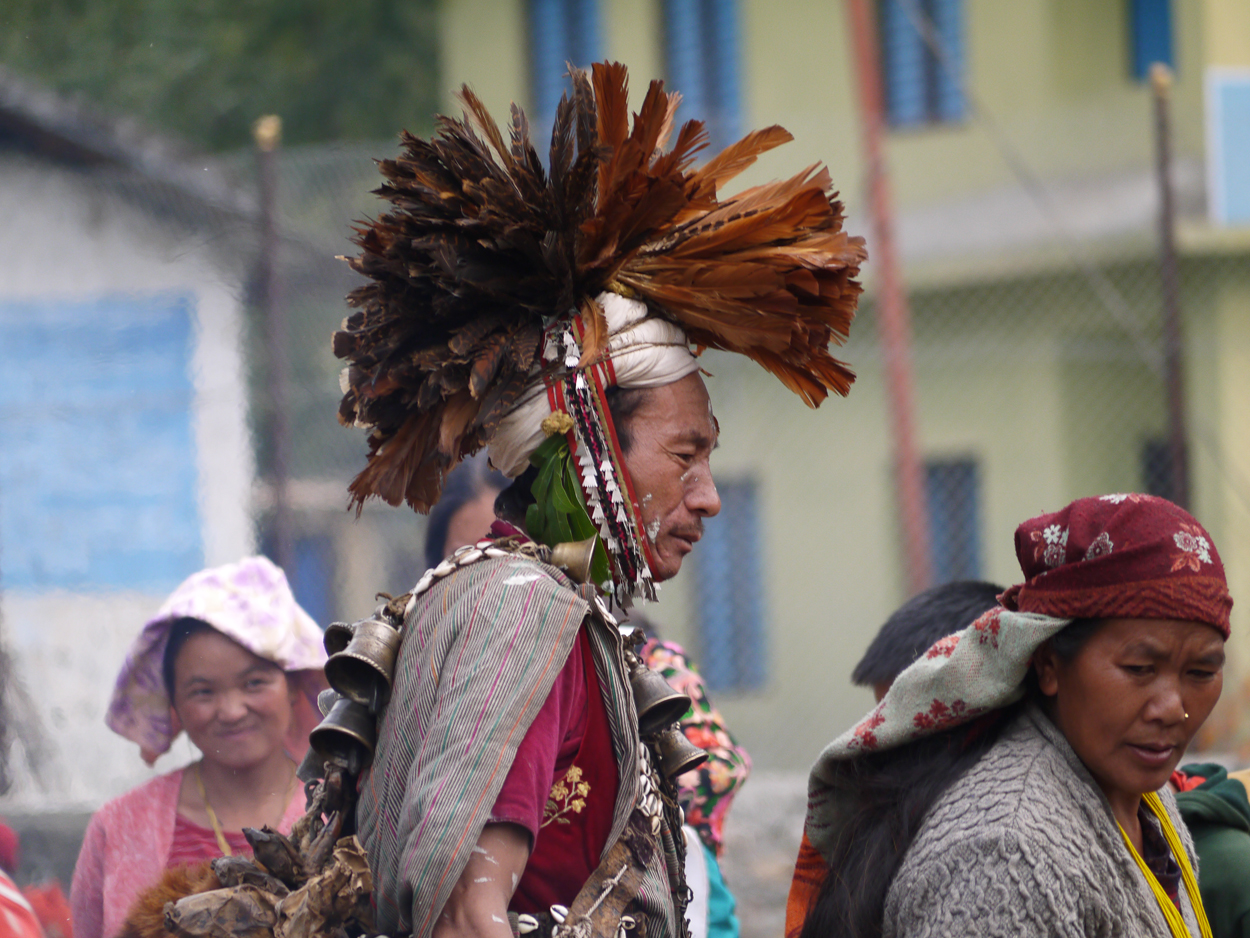 or in full evidence; the high place, like the little princes, tames slowly. It’s when we ask ourselves for a moment that we perceive the movements of the world, it’s in silence that we hear world music. For me the real journey takes place in silence and stillness, a concept that I share with my old accomplice Matthieu Ricard who illustrated it perfectly in his book of photos taken from his hermitage: ‘’ Le Voyage Immobile ’’ *

In this sense, I have never been a real trekker, because when I walk in the Himalayas or elsewhere, I always want to stop along the way to soak up places and people. During my first trek in the Annapurnas in 1976, I put my bag in the Hyangja refugee camp which, at the time was a 3 hour walk from Pokhara lake and I stayed there for 3 weeks to learn Tibetan. In the shade of the Macchapuchare, watching the long caravans of scalloped mules that left to supply the high Himalayan villages and, incidentally, feed the Tibetan guerrillas fighting against the Chinese occupation in Mustang. As for Nepal, by the way, I have finally lived there for 25 years - I guess we have to be able to make it shorter ...