On September 24th and 25th, Base Camp organized a thorough and certified high mountain rescue training for its guides. Chaired by Maurice Duchène, president of the association ICE Himalaya, this training was led by Dr. Prunier and firefighters and first aid workers of the French Federation of Rescue and First Aid. 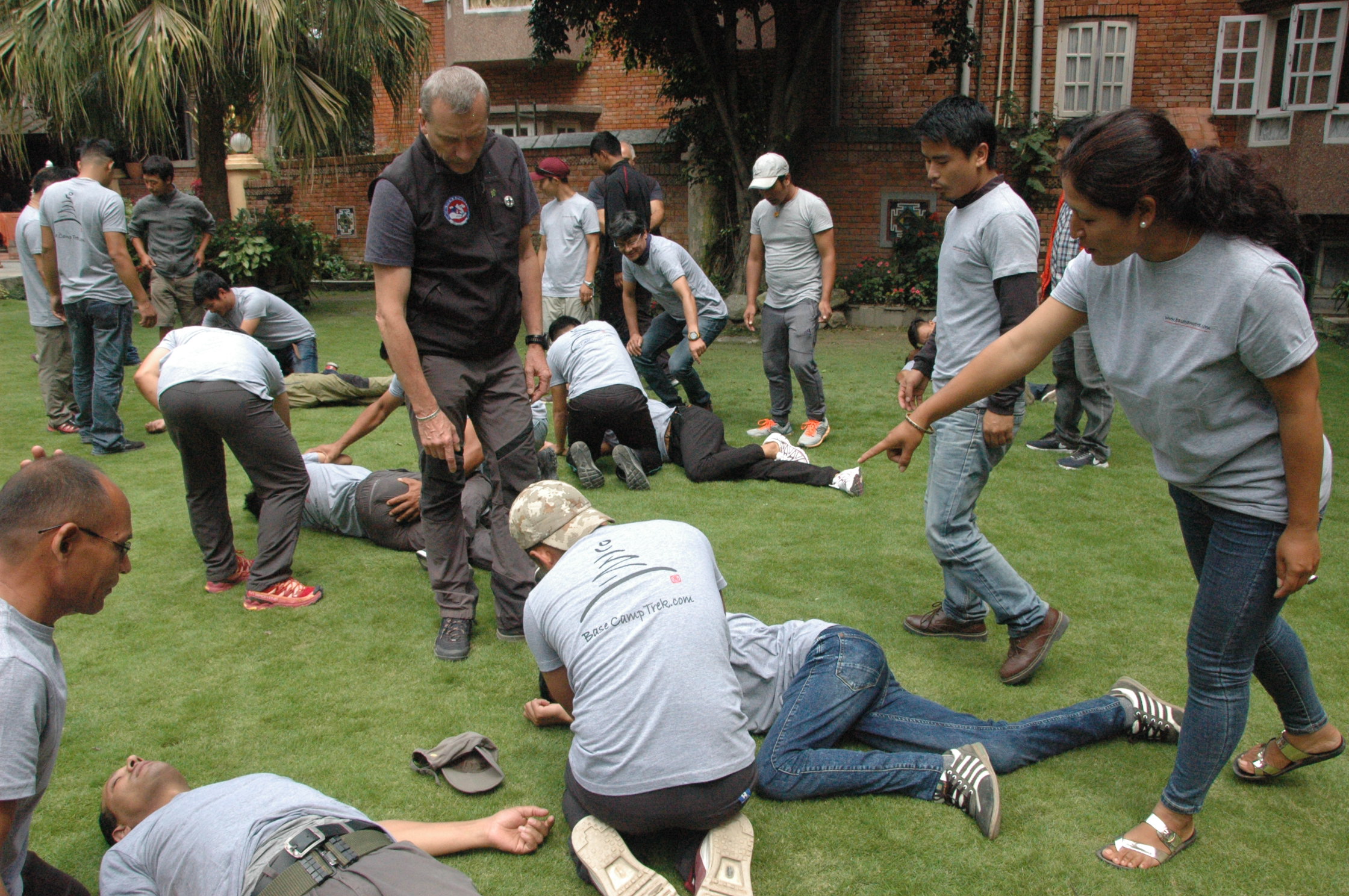 On the program: training in first aid (choking, cuts, discomfort ...) but also specific medical training in the high mountains (use of boxes, immobilization of a wounded) and of course extensive training on acute mountain sickness (MAM).
This training therefore guarantees that our guides are able to carry all the first aid gestures and have the necessary skills for the proper medical supervision of a stay in the high mountains.

"Why leave with a guide? Is there added value? "

In addition to knowing the terrain, speaking Nepalese, take care of all the logistics on site and be a pleasant companion, your guide is also and especially the one who is responsible for your safety and well-being. .. and that sometimes can save your life. Acute mountain sickness (MAM) often called altitude sickness, is the great unknown of a trekking in high mountains. It results from the difficulty of a person to adapt to the changing conditions caused by a too rapid gain of altitude. The guides are there, in the first place, to avoid that you are touched by this mountain sickness: by making sure that the climb is done gradually, by imposing a slow rhythm (even to stop the more hurried), by reminding you very often drinking water, imposing breaks regularly, but also arranging small acclimatization steps once you have arrived where you need to spend the night. 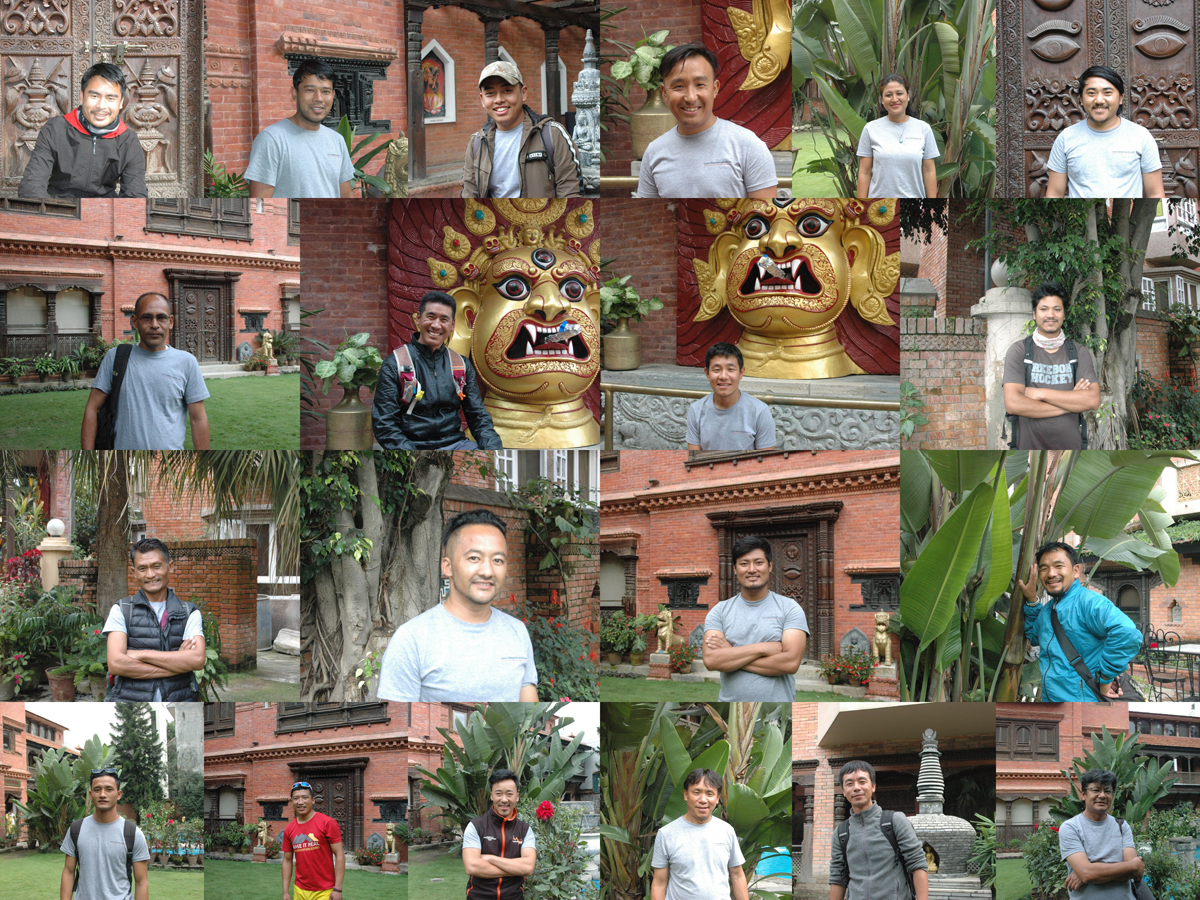 Mountain sickness can affect everyone, at all altitudes; and often the only thing to do is to come down again, to give up on his expedition. But also often, you are not the best person to make the decision to give up the trek you dreamed of and have prepared for a long time because one of the consequences of altitude is that it alters our thinking skills. The guide is not only the person who will make this difficult decision - usually in collaboration with the base camp office in Kathmandu but also the one who will take charge of organizing this descent.

Moreover, in case of climatic hazard, history has sadly shown that the first hit are the solitary travelers. A look back at the dramatic episode of October 2014 at Thorong La Pass with the testimony of Pouré Gurung, Base Camp Trek's guide:
"The day before, we slept as usual at the advanced camp, High Camp, at 4800 m at the foot of the Thorong Pass after a good acclimatization of 2 days in Manang.

That morning, some groups left very early but we had a bit of trouble because I was worried about the weather. It was snowing, the sky was threatening but I felt that the conditions were not bad enough to justify to my customers to go down. At 6:30 we attacked the climb to the pass that we reached around 9:30 pm.

From the first laces, many walkers, poorly equipped, visibly unaccustomed and often without guide already suffered from the cold and seemed unable to climb.

The groups were fraying dangerously and when around 8:00 am an icy wind got up, the snow became more intense and visibility already reduced became almost zero: white day.

At the pass, at 5400 m altitude, the situation deteriorated further. Exhausted walkers were looking for their guide, transited porters trying to shelter themselves under tarpaulins, groups were trying to warm up by hugging each other, many walkers were sitting, haggard in the snow, dazed by altitude sickness and unable to decide between staying on the spot or going down.

The descent was a hell. Nothing could be seen, and every trace of the road had disappeared. Fortunately I know this trek well and let myself be guided by my intuition because I had no other benchmarks. Windblocks were sometimes set off under our feet, carrying exhausted trekkers for a few meters. After 12 hours of walking, we finally reunited Muktinath and Jarkhot, safe and sound, with a cohort of nearly 80 people who had gradually grafted our little roped. But many stayed on the slopes of the Thorong Pass on this fatal October day for what should have been one of the happiest days of their lives. Too many people forget that you always have to be humble in front of the mountain ... "

Trekking guides are by nature mountain people, so they know this environment even though this knowledge is often more intuitive than bookish and they usually leave in their own area. They are also used to reading the clouds, the wind, the snow ... They will decide what time to leave in the morning to avoid the maximum wind, where to stop at noon ... so that everything is going well .

All our guides receive training every year before the season to update their knowledge, for your safety. Leaving with a guide is not a luxury, and more and more tourists are choosing to go solo, but you must know that the Himalayas are the highest mountains in the world, the climate is special. It is a sublime environment but inhospitable and dangerous, it is necessary not only to know the ground but also to know oneself. 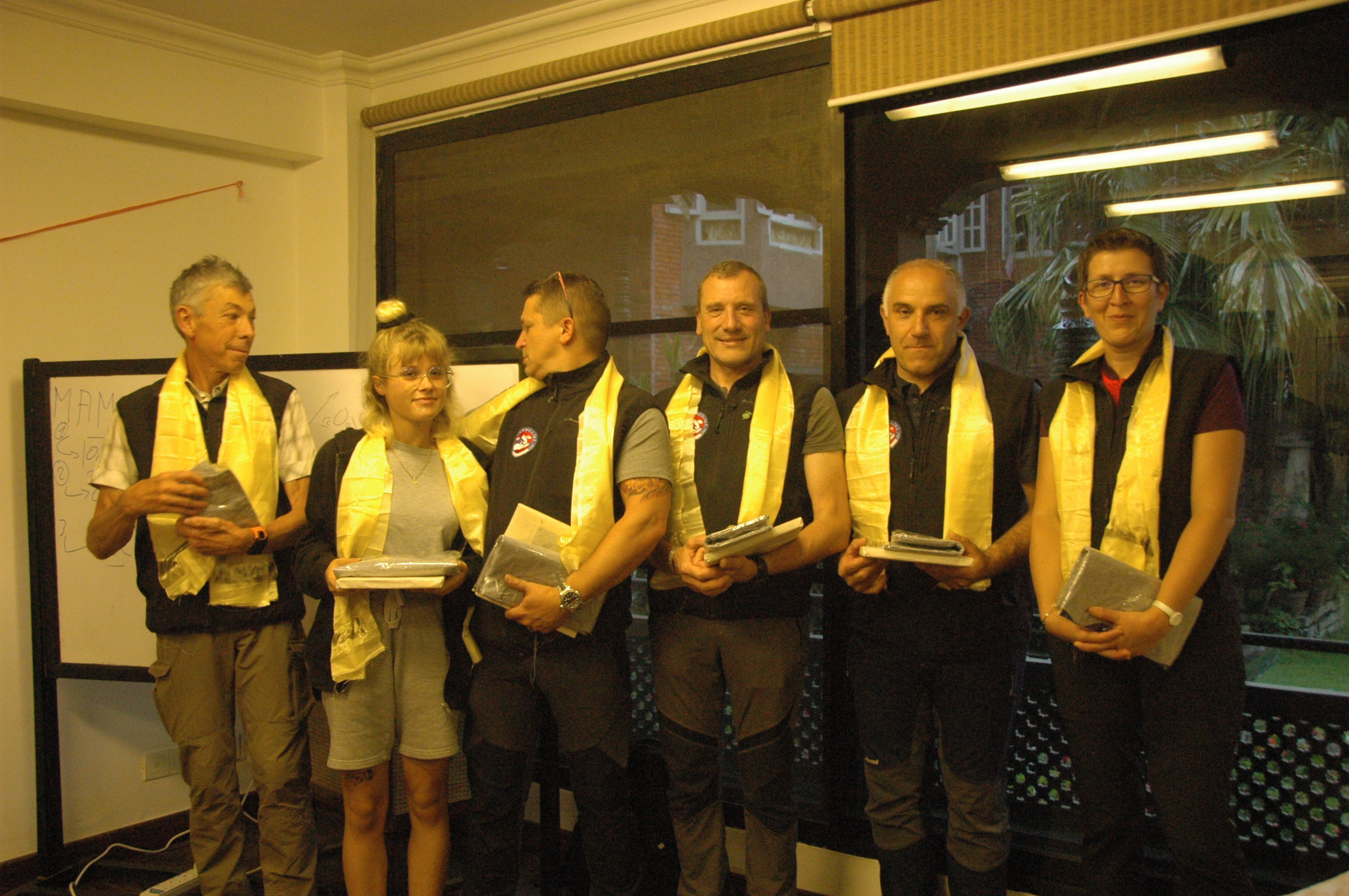 At the end of these few days, all the participants received a certificate of aptitude from Mr Arnaud Champy, representative of the French ambassador to Nepal and Dr Prunier.

We thank and congratulate our guides for their attendance, the animators for their excellent work and all that they have brought to us, the Ambassador of France and Mr. Champy for their support and the entire Base Camp team who this training is going well, and it also ensures that each trip to Nepal, each trek, is a unique experience for our guests.